Teams test a variety of UI characteristics using different tools. Each tool requires you to replicate the same component state over and over. That’s a maintenance headache. Ideally, you’d set up your tests in the same way and reuse that across tools.

Storybook enables you to isolate a component and capture all of its use cases in a *.stories.js file. Stories are standard JavaScript modules so they’re cross compatible with the whole JavaScript ecosystem. No API lock-in.

Stories are a practical starting point for UI testing. Import stories into tools like Jest, Testing Library, Puppeteer, Cypress, and Playwright to save time and maintenance work.

Setup the testing addon for your framework

Storybook has test addons for core frameworks React, Vue (2,3), and Angular. This allows you to reuse stories along with all of their mocks, dependencies, and context.

Run the following command to add Storybook's testing addon into your environment:

💡 When running the command to install the addon, don't forget to select only your framework.

If you've set up global decorators or parameters and you need to use them in your tests, add the following to your test configuration file:

Update your test script to include the configuration file:

Testing Library is a suite of helper libraries for browser-based interaction tests. With Component Story Format, your stories are reusable with Testing Library. Each named export (story) is renderable within your testing setup.

💡 You can use Testing Library out-of-the-box with Storybook Interaction Testing.

For example, if you were working on a login component and wanted to test the invalid credentials scenario, here's how you could write your test:

Once the test runs, it loads the story and renders it. Testing Library then emulates the user's behavior and checks if the component state has updated.

Cypress is an end-to-end testing framework. It enables you to test a complete instance of your application by simulating user behavior. With Component Story Format, your stories are reusable with Cypress. Each named export (in other words, a story) is renderable within your testing setup.

An example of an end-to-end test with Cypress and Storybook is testing a login component for the correct inputs. For example, if you had the following story:

With Cypress, you could write the following test:

When Cypress runs your test, it loads Storybook's isolated iframe and checks if the inputs match the test values. 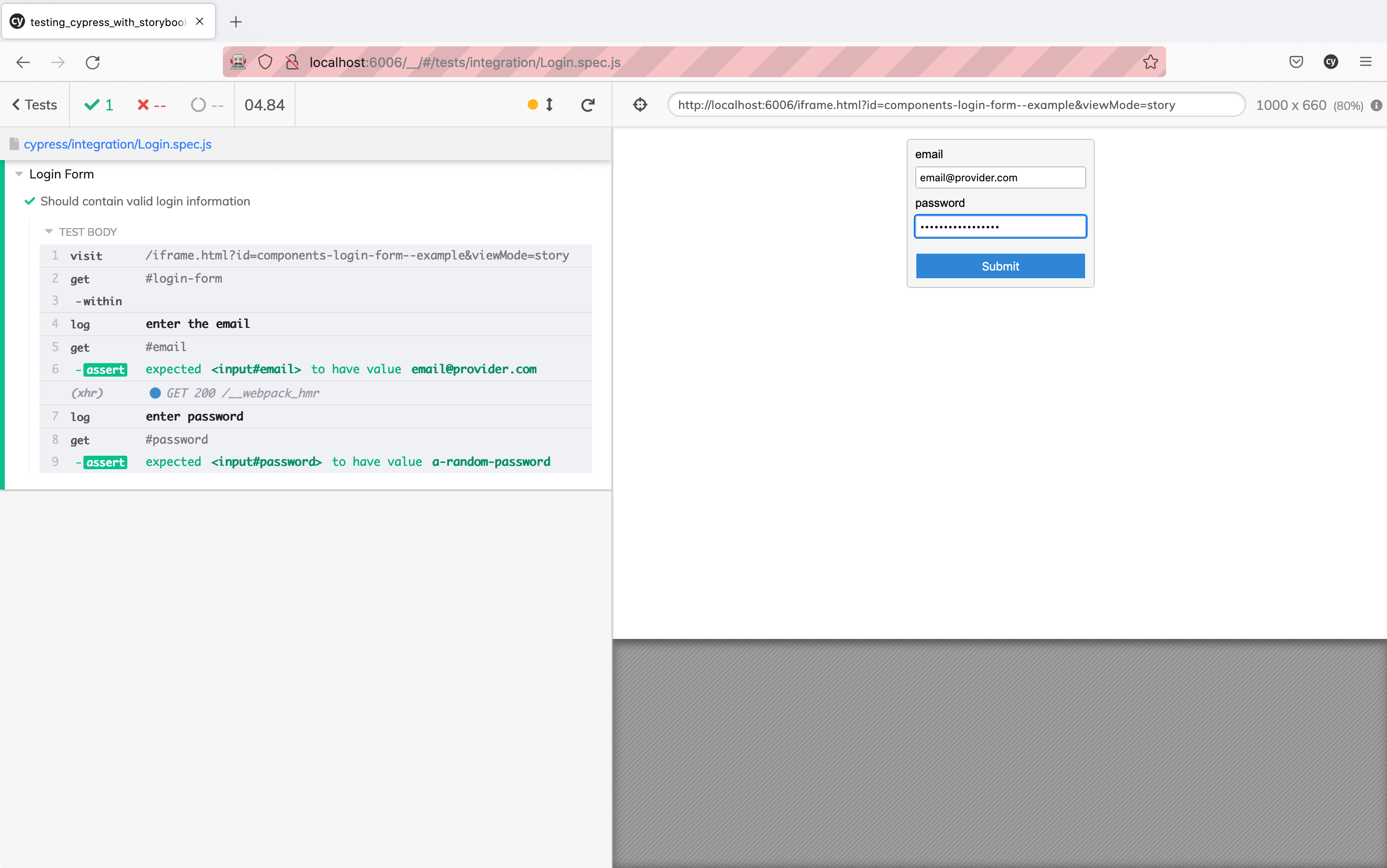 Playwright is a browser automation tool and end-to-end testing framework from Microsoft. It offers cross-browser automation, mobile testing with device emulation, and headless testing. With Component Story Format, your stories are reusable with Playwright. Each named export (in other words, a story) is renderable within your testing setup.

A real-life scenario of user flow testing with Playwright would be how to test a login form for validity. For example, if you had the following story already created:

With Playwright, you can write a test to check if the inputs are filled and match the story:

Once you execute Playwright, it opens a new browser window, loads Storybook's isolated iframe, asserts if the inputs contain the specified values, and displays the test results in the terminal.