Construct a screen out of components

We've concentrated on building UIs from the bottom up, starting small and adding complexity. Doing so has allowed us to develop each component in isolation, figure out its data needs, and play with it in Storybook. All without needing to stand up a server or build out screens!

In this chapter, we continue to increase the sophistication by combining components in a screen and developing that screen in Storybook.

As our app is straightforward, the screen we’ll build is pretty trivial, simply wrapping the TaskList component (which supplies its own data via Svelte Store) in some layout and pulling a top-level error field out of the store (let's assume we'll set that field if we have some problem connecting to our server).

Let's start by updating our Svelte store (in src/store.js) to include our new error field we want:

Now that we have the store updated with the new field. Let's create InboxScreen.svelte in your components directory:

We also need to change the App component to render the InboxScreen (eventually, we would use a router to choose the correct screen, but let's not worry about that here):

However, where things get interesting is in rendering the story in Storybook.

As we saw previously, the TaskList component is a container that renders the PureTaskList presentational component. By definition, container components cannot be simply rendered in isolation; they expect to be passed some context or connected to a service. What this means is that to render a container in Storybook, we must mock (i.e., provide a pretend version) the context or service it requires.

When placing the TaskList into Storybook, we were able to dodge this issue by simply rendering the PureTaskList and avoiding the container. We'll do something similar and render the InboxScreen in Storybook also.

So when we set up our stories in InboxScreen.stories.js:

We see that both the Error and Default stories work just fine.

💡 As an aside, passing data down the hierarchy is a legitimate approach, especially when using GraphQL. It’s how we have built Chromatic alongside 800+ stories.

Cycling through states in Storybook makes it easy to test we’ve done this correctly:

So far, we've been able to build a fully functional application from the ground up, starting from a simple component up to a screen and continuously testing each change using our stories. But each new story also requires a manual check on all the other stories to ensure the UI doesn't break. That's a lot of extra work.

Can't we automate this workflow and test our component interactions automatically?

Storybook's play and @storybook/addon-interactions help us with that. A play function includes small snippets of code that run after the story renders.

The play function helps us verify what happens to the UI when tasks are updated. It uses framework-agnostic DOM APIs, which means we can write stories with the play function to interact with the UI and simulate human behavior no matter the frontend framework.

The @storybook/addon-interactions helps us visualize our tests in Storybook, providing a step-by-step flow. It also offers a handy set of UI controls to pause, resume, rewind, and step through each interaction.

Let's see it in action! Update your newly created PureInboxScreen story, and set up component interactions by adding the following:

Check your newly created story. Click the Interactions panel to see the list of interactions inside the story's play function.

Automate tests with the test runner

With Storybook's play function, we were able to sidestep our problem, allowing us to interact with our UI and quickly check how it responds if we update our tasks—keeping the UI consistent at no extra manual effort.

But, if we take a closer look at our Storybook, we can see that it only runs the interaction tests when viewing the story. Therefore, we'd still have to go through each story to run all checks if we make a change. Couldn't we automate it?

The good news is that we can! Storybook's test runner allows us to do just that. It's a standalone utility—powered by Playwright—that runs all our interactions tests and catches broken stories.

Let's see how it works! Run the following command to install it:

Next, update your package.json scripts and add a new test task:

Finally, with your Storybook running, open up a new terminal window and run the following command:

Copy
💡 Interaction testing with the play function is a fantastic way to test your UI components. It can do much more than we've seen here; we recommend reading the official documentation to learn more about it.
For an even deeper dive into testing, check out the Testing Handbook. It covers testing strategies used by scaled-front-end teams to supercharge your development workflow. 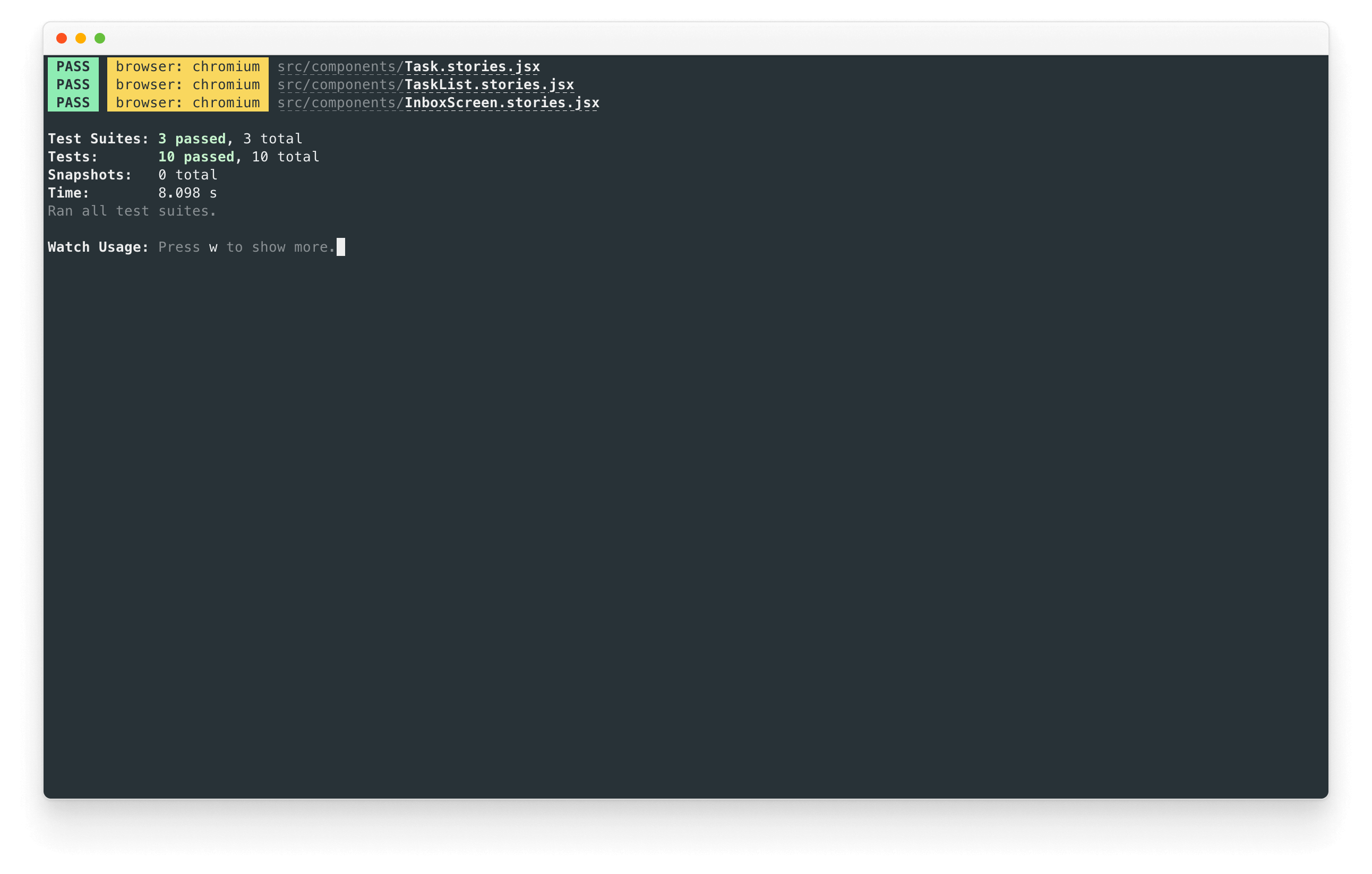 Success! Now we have a tool that helps us verify whether all our stories are rendered without errors and all assertions pass automatically. What's more, if a test fails, it will provide us with a link that opens up the failing story in the browser.

We started from the bottom with Task, then progressed to TaskList, now we’re here with a whole screen UI. Our InboxScreen accommodates a nested container component and includes accompanying stories.

Component-Driven Development allows you to gradually expand complexity as you move up the component hierarchy. Among the benefits are a more focused development process and increased coverage of all possible UI permutations. In short, CDD helps you build higher-quality and more complex user interfaces.

We’re not done yet - the job doesn't end when the UI is built. We also need to ensure that it remains durable over time.

💡 Don't forget to commit your changes with git!
Is this free guide helping you? Tweet to give kudos and help other devs find it.
Next Chapter
Deploy
Learn how to deploy Storybook online
✍️ Edit on GitHub – PRs welcome!