Build a simple component in isolation

We’ll build our UI following a Component-Driven Development (CDD) methodology. It’s a process that builds UIs from the “bottom up” starting with components and ending with screens. CDD helps you scale the amount of complexity you’re faced with as you build out the UI. 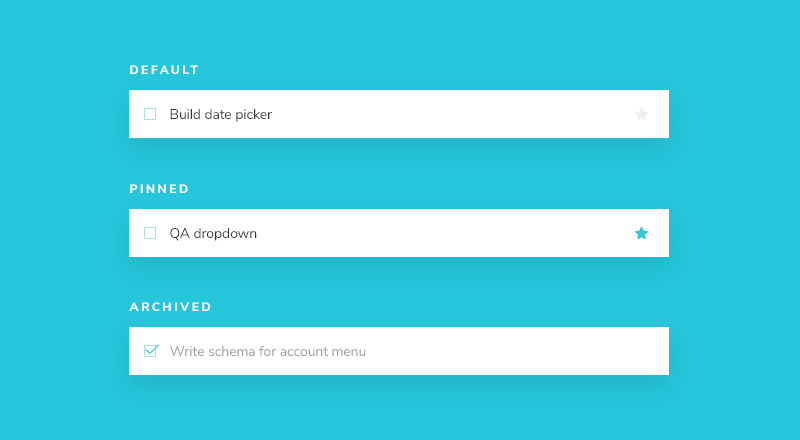 Task is the core component in our app. Each task displays slightly differently depending on exactly what state it’s in. We display a checked (or unchecked) checkbox, some information about the task, and a “pin” button, allowing us to move tasks up and down the list. Putting this together, we’ll need these props:

As we start to build Task, we first write our test states that correspond to the different types of tasks sketch above. Then we use Storybook to build the component in isolation using mocked data. We’ll “visual test” the component’s appearance given each state as we go.

This process is similar to Test-driven development (TDD) that we can call “Visual TDD”.

We’ll begin with the baseline implementation of the Task, simply taking in the attributes we know we’ll need:

Above, we render straightforward markup for Task based on the existing HTML structure of the Todos app.

Below we build out Task’s three test states in the story file:

There are two basic levels of organization in Storybook: the component and its child stories. Think of each story as a permutation of a component. You can have as many stories per component as you need.

To tell Storybook about the component we are documenting, we create a default export that contains:

To define our stories, we export a function for each of our test states to generate a story. The story is a function that returns a rendered element (i.e. a component class with a set of props) in a given state---exactly like a Stateless Functional Component.

As we have multiple permutations of our component, it's convenient to assign it to a Template variable. Introducing this pattern in your stories will reduce the amount of code you need to write and maintain.

💡 Template.bind({}) is a standard JavaScript technique for making a copy of a function. We use this technique to allow each exported story to set its own properties, but use the same implementation.

Arguments or args for short, allow us to live edit our components with the controls addon without restarting Storybook. Once an args value changes so does the component.

When creating a story we use a base task arg to build out the shape of the task the component expects. This is typically modelled from what the true data looks like. Again, export-ing this shape will enable us to reuse it in later stories, as we'll see.

action() allows us to create a callback that appears in the actions panel of the Storybook UI when clicked. So when we build a pin button, we’ll be able to determine in the test UI if a button click is successful.

As we need to pass the same set of actions to all permutations of our component, it is convenient to bundle them up into a single actionsData variable and pass them into our story definition each time (where they are accessed via the methods property).

Another nice thing about bundling the actionsData that a component needs, is that you can export them and use them in stories for components that reuse this component, as we'll see later.

💡 Actions help you verify interactions when building UI components in isolation. Oftentimes you won't have access to the functions and state you have in context of the app. Use action() to stub them in.

We'll need to make a couple of changes to Storybook's configuration files so it notices not only our recently created stories and allow us to use the application's CSS file (located in src/index.css).

Start by changing your Storybook configuration file (.storybook/main.js) to the following:

After completing the change above, inside the .storybook folder, change your preview.js to the following:

parameters are typically used to control the behavior of Storybook's features and addons. In our case we're going to use them to configure how the actions (mocked callbacks) are handled.

actions allows us to create callbacks that appear in the actions panel of the Storybook UI when clicked. So when we build a pin button, we’ll be able to determine in the test UI if a button click is successful.

Once we’ve done this, restarting the Storybook server should yield test cases for the three Task states:

Build out the states

Now we have Storybook setup, styles imported, and test cases built out, we can quickly start the work of implementing the HTML of the component to match the design.

Our component is still rather rudimentary at the moment. We're going to make some changes so that it matches the intended design without going into too much detail:

The additional markup from above combined with the CSS we imported earlier yields the following UI:

We’ve now successfully built out a component without needing a server or running the entire frontend application. The next step is to build out the remaining Taskbox components one by one in a similar fashion.

As you can see, getting started building components in isolation is easy and fast. We can expect to produce a higher-quality UI with fewer bugs and more polish because it’s possible to dig in and test every possible state.

Storybook gave us a great way to visually test our application during construction. The ‘stories’ will help ensure we don’t break our Task visually as we continue to develop the app. However, it is a completely manual process at this stage, and someone has to go to the effort of clicking through each test state and ensuring it renders well and without errors or warnings. Can’t we do that automatically?

Snapshot testing refers to the practice of recording the “known good” output of a component for a given input and then flagging the component whenever the output changes in future. This complements Storybook, because Storybook is a quick way to view the new version of a component and visualize the changes.

💡 Make sure your components render data that doesn't change, so that your snapshot tests won't fail each time. Watch out for things like dates or randomly generated values.

With the Storyshots addon a snapshot test is created for each of the stories. Use it by adding the following development dependencies:

Then create a tests/unit/storybook.spec.js file with the following in it:

We need to add a line to our jest.config.js:

Once the above is done, we can run yarn test:unit and see the following output: 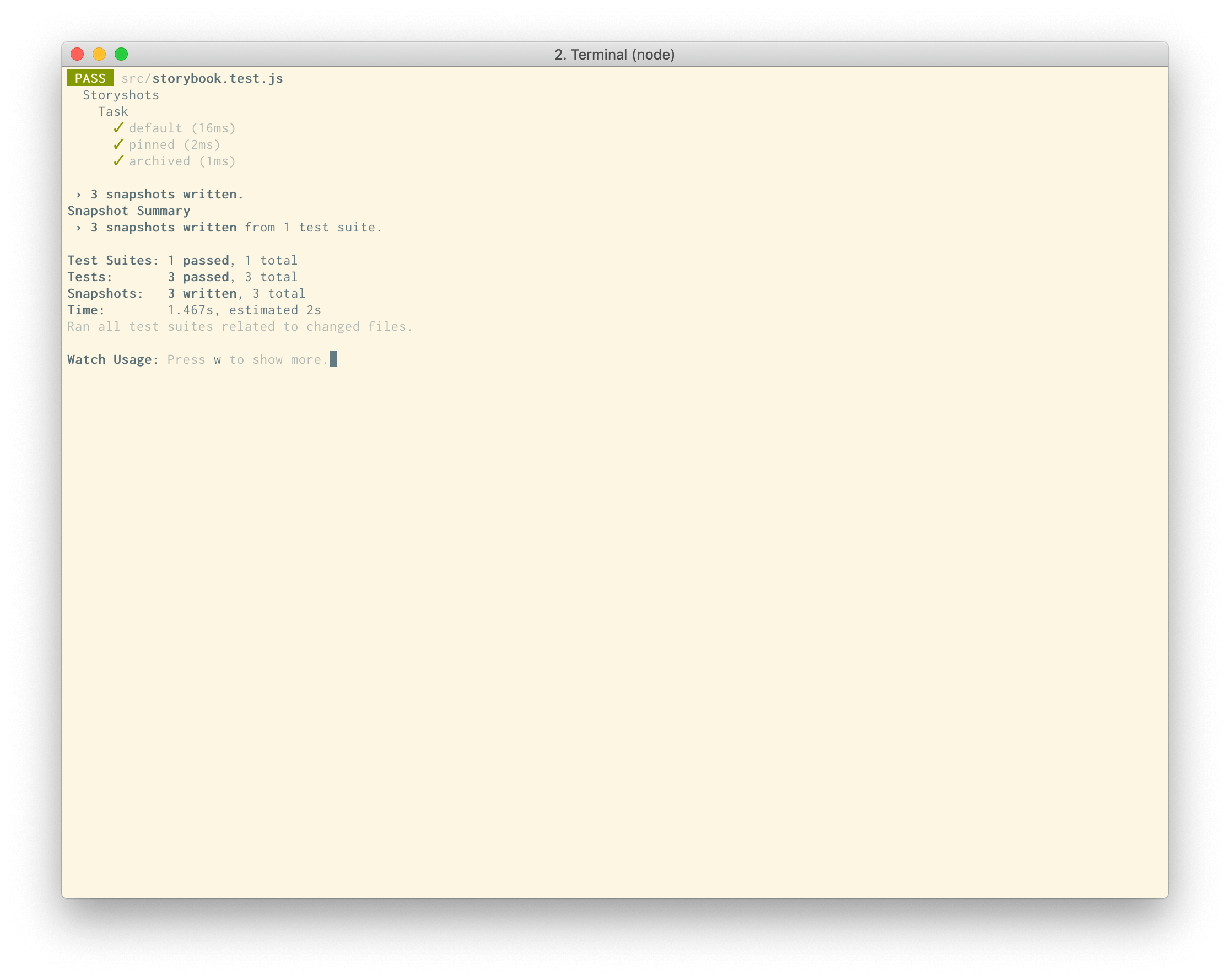 We now have a snapshot test for each of our Task stories. If we change the implementation of Task, we’ll be prompted to verify the changes.

💡 Don't forget to commit your changes with git!
Keep your code in sync with this chapter. View f03552f on GitHub.
Is this free guide helping you? Tweet to give kudos and help other devs find it.
Next Chapter
Composite component
Assemble a composite component out of simpler components
✍️ Edit on GitHub – PRs welcome!