How to test design system appearance, functionality, and accessibility

In chapter 5, we automate design system testing to prevent UI bugs. This chapter dives into what characteristics of UI components warrant testing and potential pitfalls to avoid. We researched professional teams at Wave, BBC, and Salesforce to land on a test strategy that balances comprehensive coverage, straightforward setup, and low maintenance. 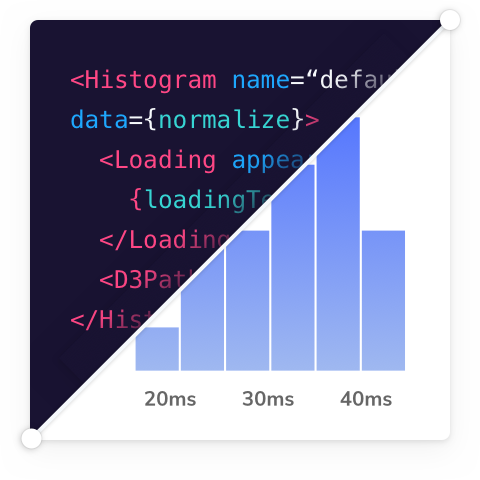 Before we begin, let’s figure out what makes sense to test. Design systems are composed of UI components. Each UI component includes stories (permutations) that describe the intended look and feel given a set of inputs (props). Stories are then rendered by a browser or device for the end-user. 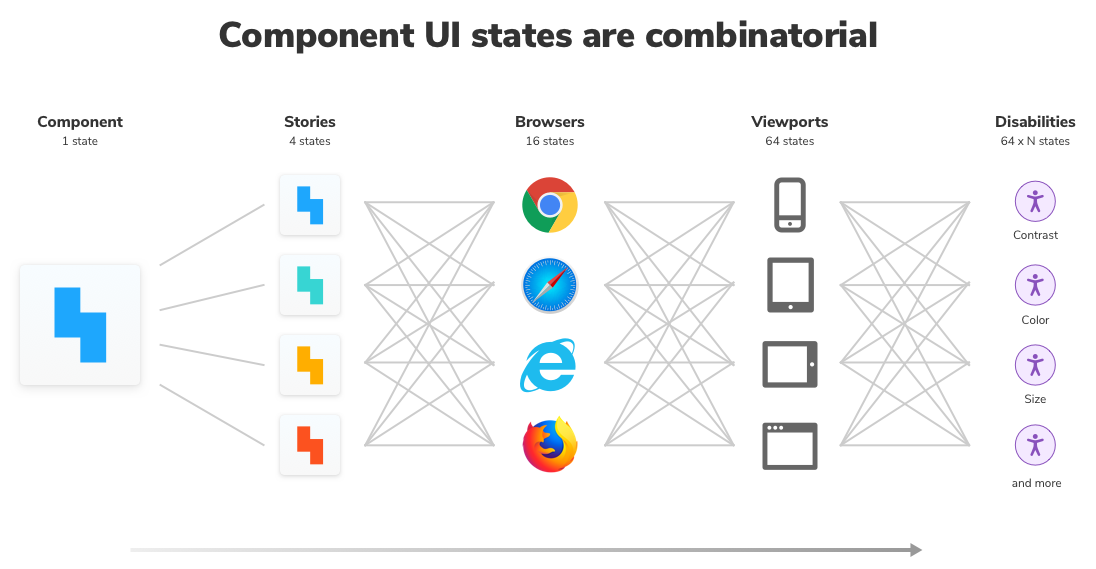 Whoa! As you can see, one component contains many states. Multiply the states by the number of design system components, and you can see why keeping track of them all is a Sisyphean task. In reality, it’s unsustainable to review each experience by hand, especially as the design system grows.

All the more reason to set up automated testing now to save work in the future.

I surveyed 4 frontend teams about professional Storybook workflows in a previous article. They agreed on these best practices for writing stories to make testing easy and comprehensive.

Articulate supported component states as stories to clarify which combinations of inputs yield a given state. Ruthlessly omit unsupported states to reduce noise.

Render components consistently to mitigate variability that can be triggered by randomized (Math.random()) or relative (Date.now()) inputs.

“The best kind of stories allow you to visualize all of the states your component could experience in the wild” – Tim Hingston, Tech lead at Apollo GraphQL

Visual tests capture an image of every UI component in a consistent browser environment. New screenshots are automatically compared to previously accepted baseline screenshots. When there are visual differences, you get notified.

In the previous chapter we learned how to publish Storybook using Chromatic. We added a bold red border around each Button component and then requested feedback from teammates.

Now let's see how visual testing works using Chromatic's built-in testing tools. When we created the pull request, Chromatic captured images for our changes and compared them to previous versions of the same components. Four changes were found: 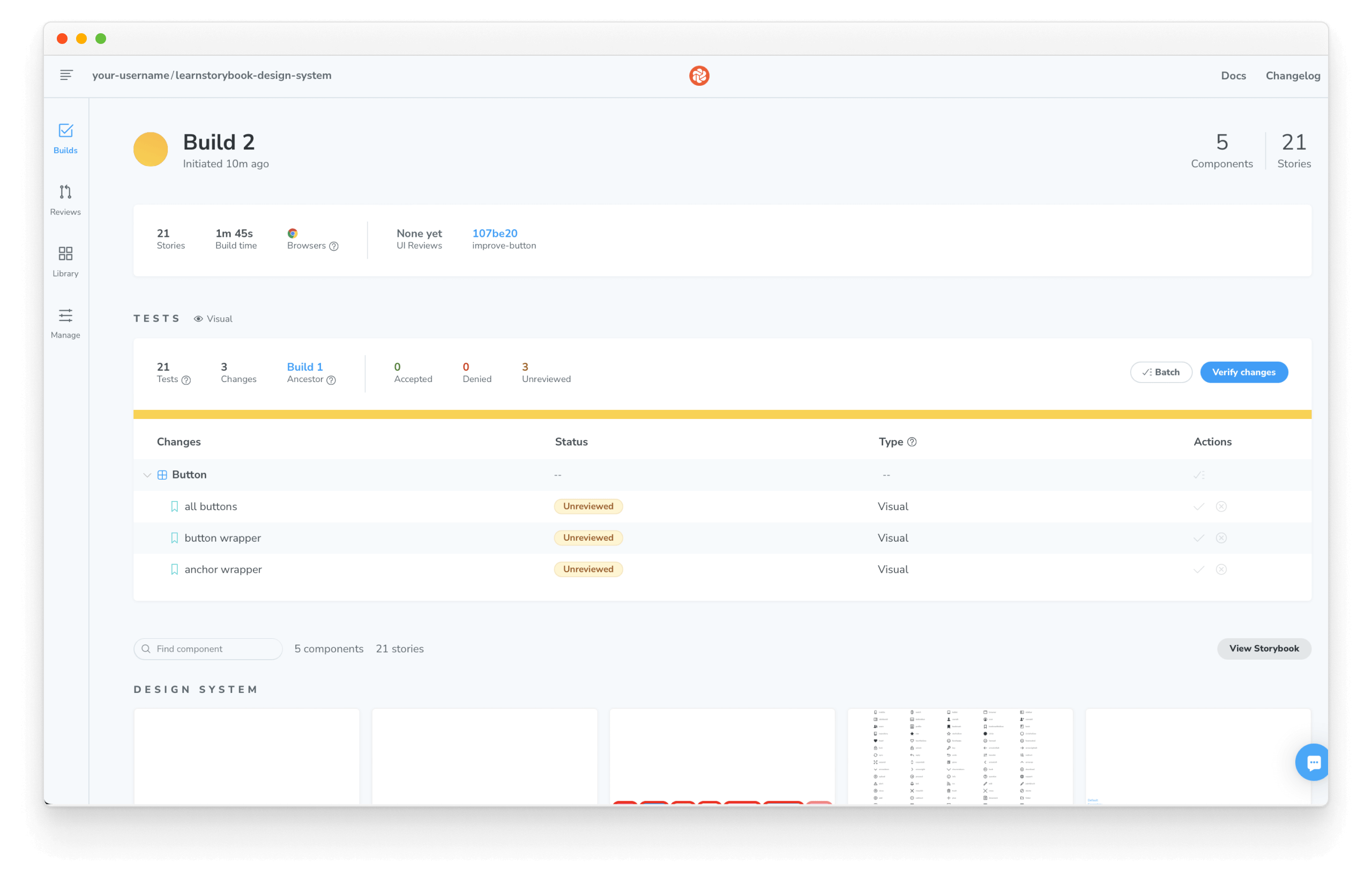 Review them to confirm whether they’re intentional (improvements) or unintentional (bugs). If you accept the changes, the test baselines will be updated. That means subsequent commits will be compared to the new baselines to detect bugs. 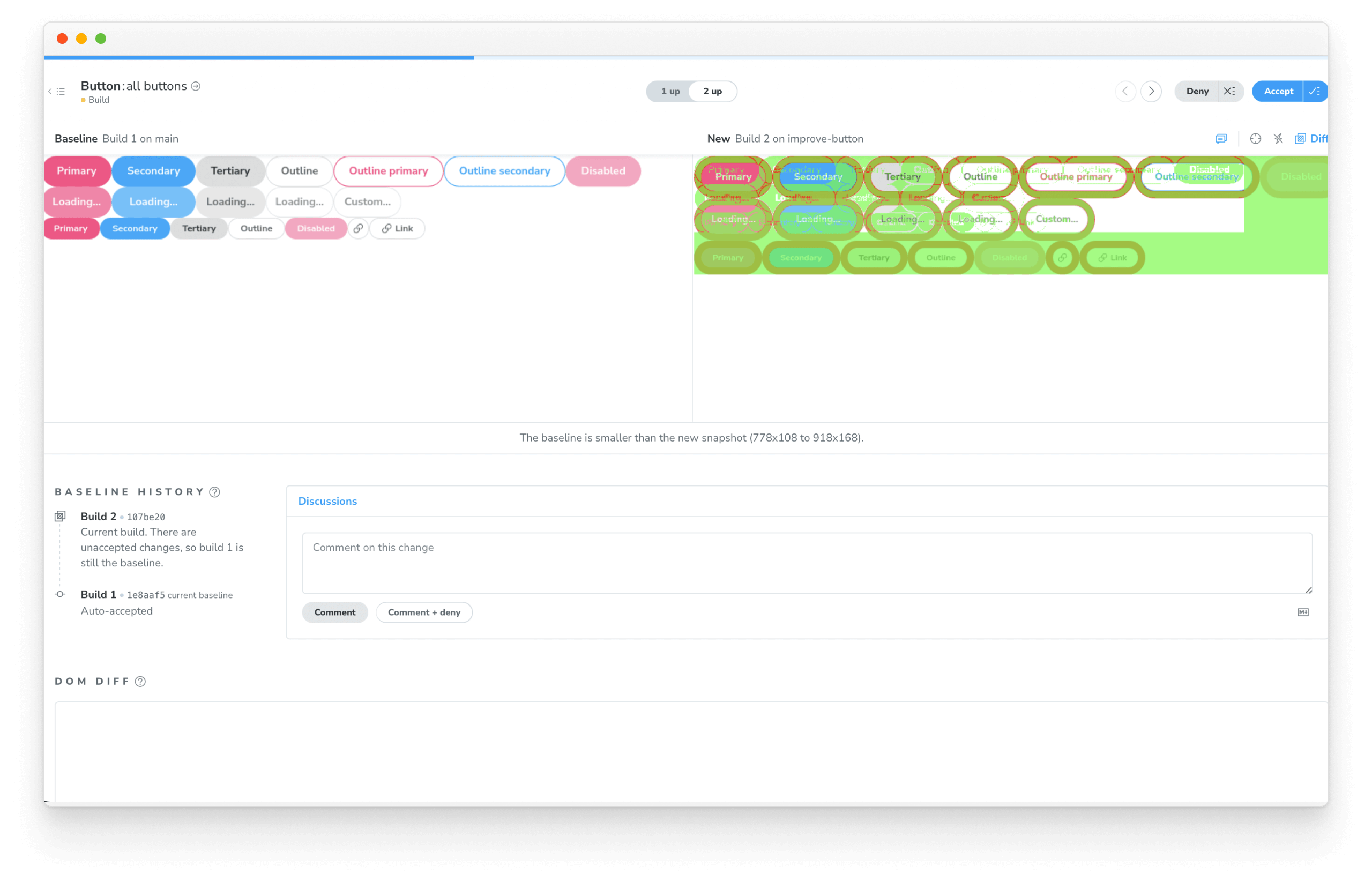 In the last chapter, our teammate did not want a red border around the Button's for some reason. Deny the changes to indicate that they need to be undone. 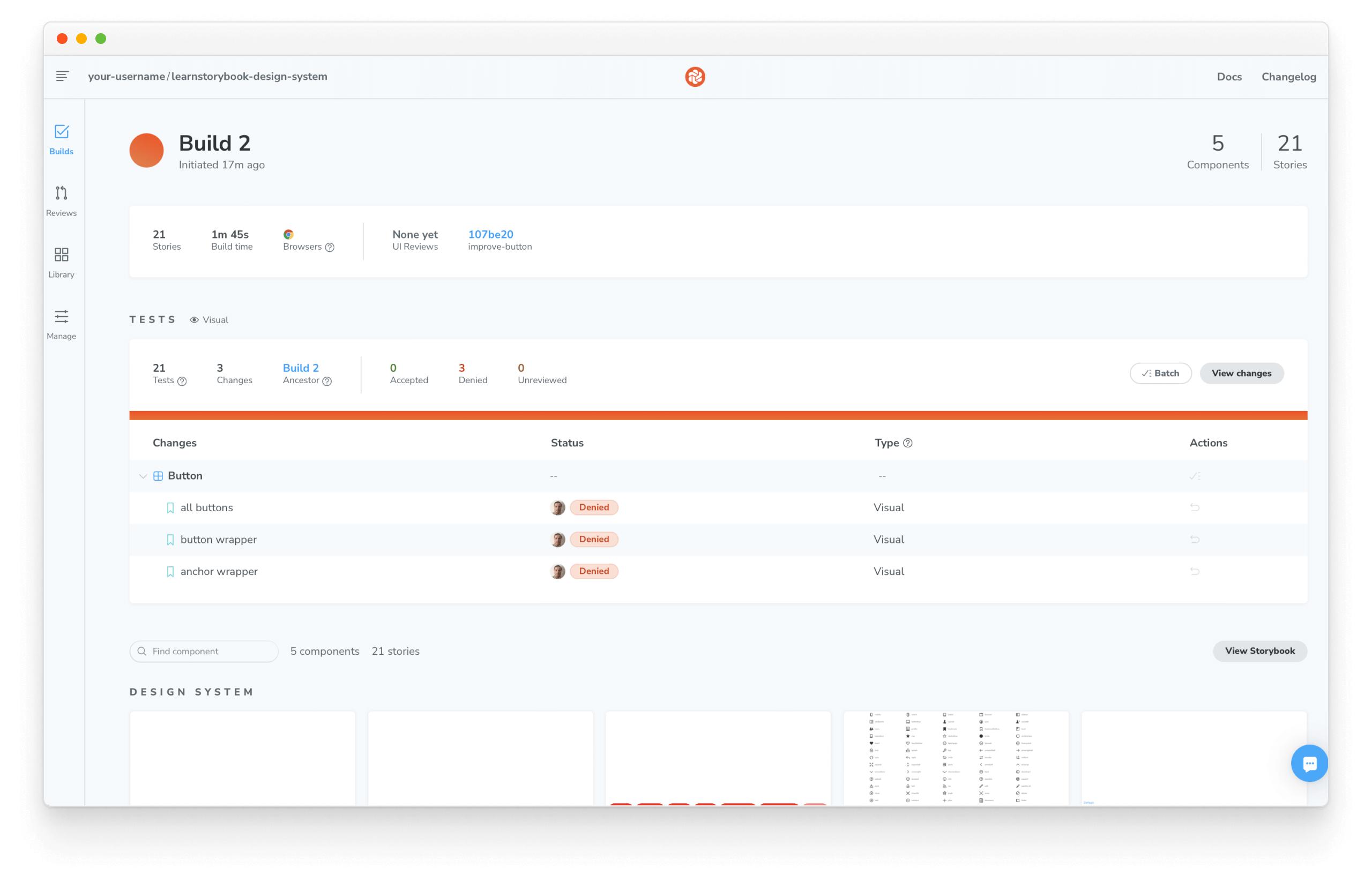 Undo the changes and commit again to pass your visual tests again.

So far, we've seen how visual testing enabled us to spot-check appearance and catch UI regressions. But as we continue to develop our design system, our components will eventually become responsible for more than just rendering the UI. At some point, they'll handle state management or even fetch data. That's where testing component interactions will help us.

Interaction testing is a well-known pattern for verifying user behavior. You start by providing mocked data to set up your test, simulate user interactions with a testing library, and verify the UI changes. In Storybook, this happens in the browser, making it easier to debug failures because you're running tests in the same environment as you develop components: the browser.

To enable it, we're going to rely on Storybook's play function and instrumented testing libraries to set up our tests and then use the test-runner verify our that the component renders correctly.

Start by adding the necessary dependencies with:

Next, update your Storybook configuration to enable playback controls for debugging.

Finally, add a new test task to your package.json scripts:

Interaction tests are centered around how the UI handles user actions, either using the keyboard, mouse, or other input devices and checking whether UI visual elements are displayed and working correctly. Testing libraries like Jest provide helpful APIs for simulating human interactions and verifying the UI state. We'll use instrumented versions of these tools to write our tests. Therefore, maintaining a common syntax, but with additional telemetry to help us debug.

The test itself is defined inside a play function connected to a story. They're small snippets of code that run after the story renders.

Let's see how it works by updating the Button story and set up our first interaction test by adding the following:

When Storybook finishes rendering the story, it executes the steps defined inside the play function, interacting with the component, similar to how a user would do it. Click the Interactions panel. You'll see a detailed execution flow while also providing a convenient set of UI controls to pause, resume, rewind, and step through each interaction.

Automate tests with the test runner

We've seen how interaction tests with the play function helped us verify how a component responds when we interact with it. But as design systems evolve, manually verifying every change can quickly become unrealistic. Storybook test runner automates this process. It's a standalone alone utility—powered by Playwright—that runs parallel to your Storybook, executing all interaction tests and catching broken stories.

With Storybook running, open a new terminal window and run the test runner with: 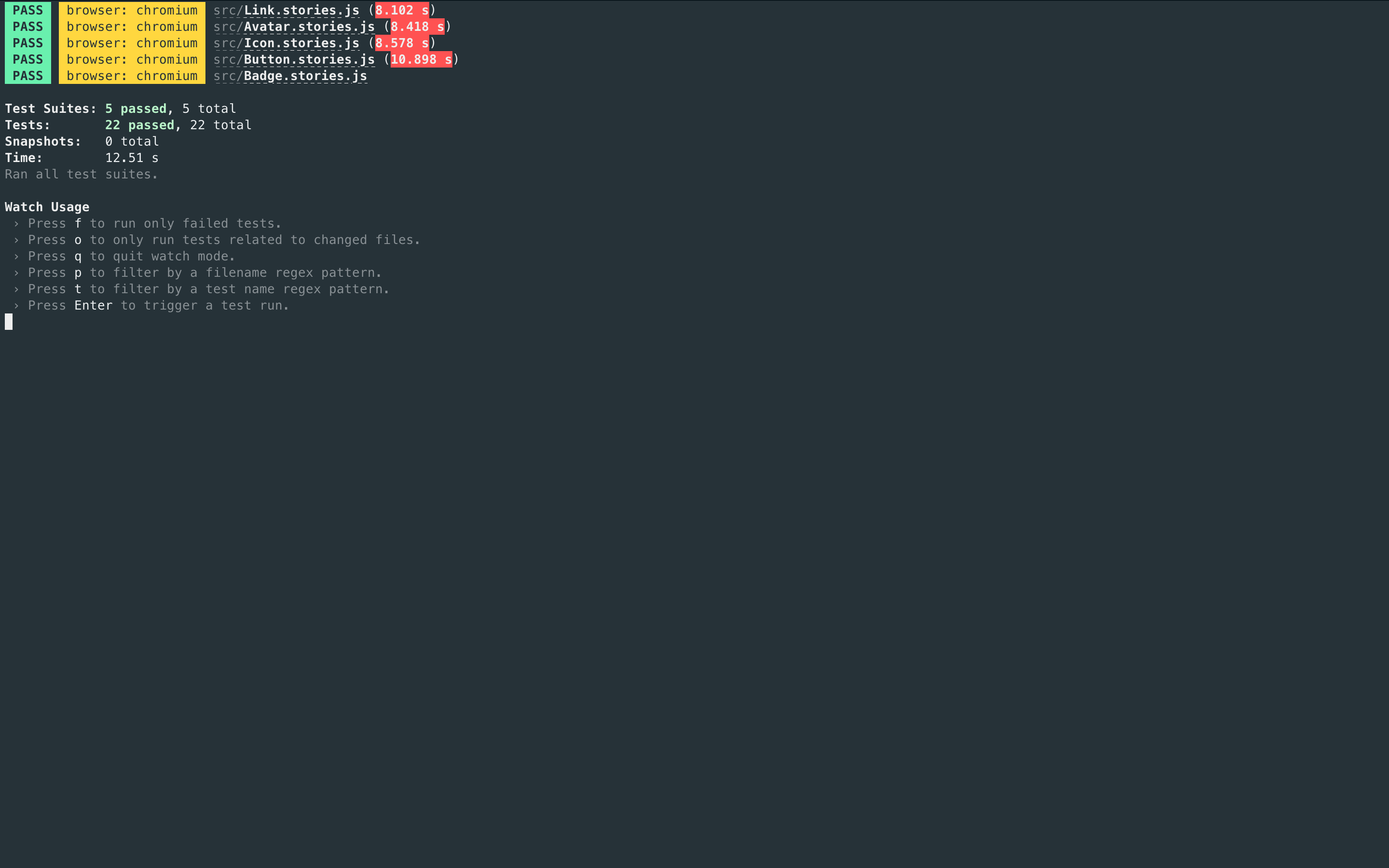 It will verify whether all our stories render without errors and all assertions pass automatically during execution. What's more, if a test fails, it will provide us with a link that opens up the failing story in the browser.

“Accessibility means all people, including those with disabilities, can understand, navigate, and interact with your app... Online [examples include] alternative ways to access content such as using the tab key and a screen reader to traverse a site.” writes developer Alex Wilson from T.Rowe Price.

Disabilities affect 15% of the population, according to the World Health Organization. Design systems have an outsized impact on accessibility because they contain the building blocks of user interfaces. Improving accessibility of just one component means every instance of that component across your company benefits. 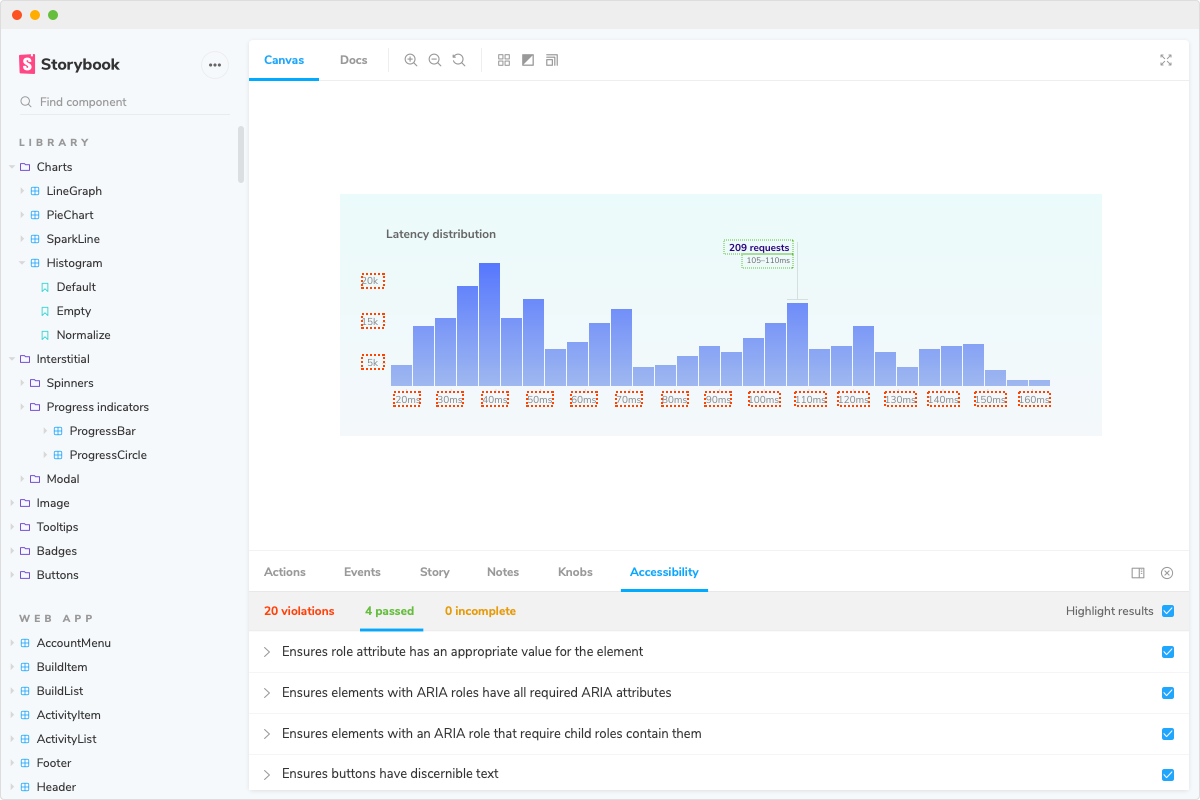 Get a headstart on inclusive UI with Storybook’s Accessibility addon, a real-time tool for verifying web accessibility standards (WCAG).

Update your Storybook configuration to include the addon.

Once all is set up, you’ll see a new “Accessibility” tab in the Storybook addons panel. 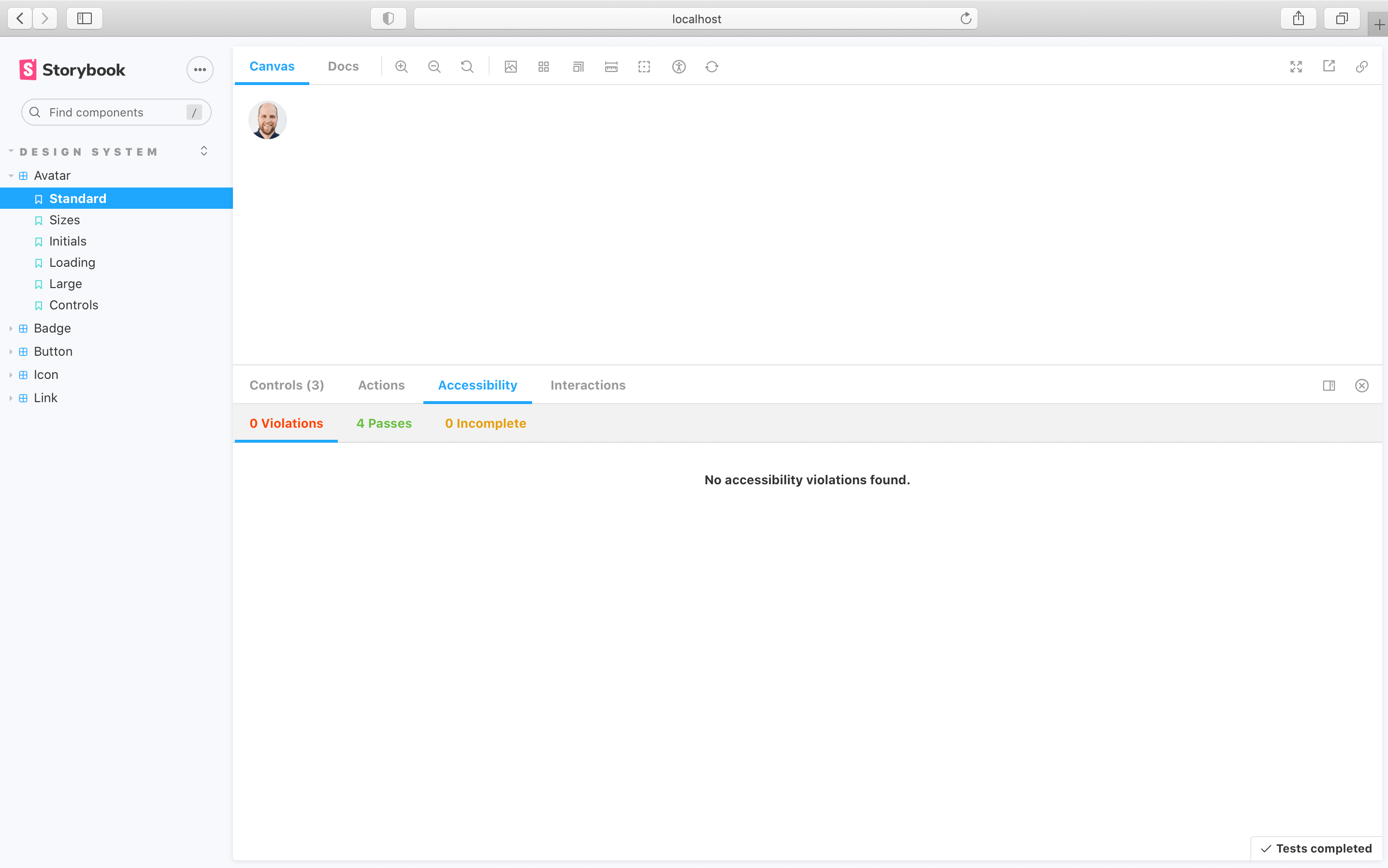 It shows you the accessibility levels of DOM elements (violations and passes). Click the “highlight results” checkbox to visualize violations in situ with the UI component.

Paradoxically, tests can save time but also bog down development velocity with maintenance. Be judicious about testing the right things – not everything. Even though software development has many test strategies, we discovered the hard way that some aren’t suited for design systems.

This technique captures the code output of UI components and compares it to previous versions. Testing UI component markup ends up testing implementation details (code), not what the user experiences in the browser.

End-to-end tests traverse the component DOM to simulate the user flow. They’re best suited for verifying app flows like the signup or checkout process. The more complex functionality, the more useful this testing strategy is.

Design systems contain atomic components with relatively simple functionality. Validating user flows is often overkill for this task because the tests are time-consuming to create and brittle to maintain. However, in rare situations, components may benefit from end-to-end tests. For instance, validating complex UIs like datepickers or self-contained payment forms.

A design system is not complete with tests alone. Since design systems serve stakeholders from across the organization, we need to teach others how to get the most from our well-tested UI components.

In chapter 6, we’ll learn how to accelerate design system adoption with documentation. See why Storybook Docs is a secret weapon to create comprehensive docs with less work.

Keep your code in sync with this chapter. View a676146 on GitHub.
Is this free guide helping you? Tweet to give kudos and help other devs find it.
Next Chapter
Document
Drive design system adoption with documentation
✍️ Edit on GitHub – PRs welcome!