It's tough to ship bug-free UIs. In the past, developers used unit and snapshot tests to scan for bugs in blobs of HTML. But those methods don't represent what the user actually sees, so bugs never went away.

Visual testing catches bugs by capturing and comparing image snapshots in a real browser. It allows you to automate the process of checking if your UI looks right.

What are visual bugs?

Every company is now a software company. That means every company is responsible for maintaining a UI. But if you’re like me, you probably noticed that companies never seem to have enough people monitor every part of their UI all the time.

Visual bugs are the unintentional errors in your UIs appearance that make it look untrustworthy. They’re the regressions that are easy to eyeball but that common testing methods can’t catch.

Most tests are intended to verify logic, which makes sense: you run a function, get its output and check whether it's correct or not. Computers are great at verifying data. But what about how something looks?

Well, there are two layers to this problem.

Take, for example, this Task component. It looks different depending on what state it’s in. We display a checked (or unchecked) checkbox, some information about the task, and a pin button. And of course, all the associated styling.

The first challenge is just to verify the component's appearance in all these scenarios. That requires a lot of fiddling with props & state to set up and test each case. Oh, and computers can’t really tell you if it matches the spec or not. You, the developer, have to visually inspect it.

2. Does it still look right?

You built it right the first time. It looks good in all states. But changes happen over the natural course of development. Bugs inevitably sneak in. This is especially true for interfaces. A minor CSS tweak can break a component or one of its states.

You can’t manually check the breadth of the UI every time you make a change. You need something more automated.

Visual testing allows you to tackle both these tasks with one unified workflow. It is the process of verifying the appearance of a component as you’re building it. And again as you iterate to ship new features.

The crux of visual testing is isolating the UI from the rest of the app (data, backend, APIs). That allows you to observe each state individually. You can then manually spot check and automatically regression test those states.

Let's go through each step in detail.

It’s much easier to pinpoint bugs by testing one component at a time and writing a test case for each of its states. The conventional approach is to build the component on the application page where it is first used. Which makes it hard to simulate and verify all these states. There’s a better way—Storybook.

Storybook is the industry-standard for building components in isolation. It’s used by Twitter, Slack, Airbnb, Shopify, Stripe, and Microsoft. It is packaged as a small standalone tool that lives alongside your app, giving you:

Let’s go back to that Task component. To isolate it means that we load up and render this one component by itself. For that, we need Storybook.

Our project is preconfigured to use Storybook. The config lives in the .storybook folder and all the necessary scripts have been added to package.json.

We can start by creating a story file for the Task component. This registers the component with Storybook and adds in one default test case.

And finally, run the following command to start Storybook in development mode. You should see the Task component load up.

We're now ready to write out the test cases.

In Storybook, test cases are referred to as stories. A story captures a particular state of the component—the actual rendered state in the browser.

The Task component has three states—default, pinned and archived. We’ll add a story for each one. 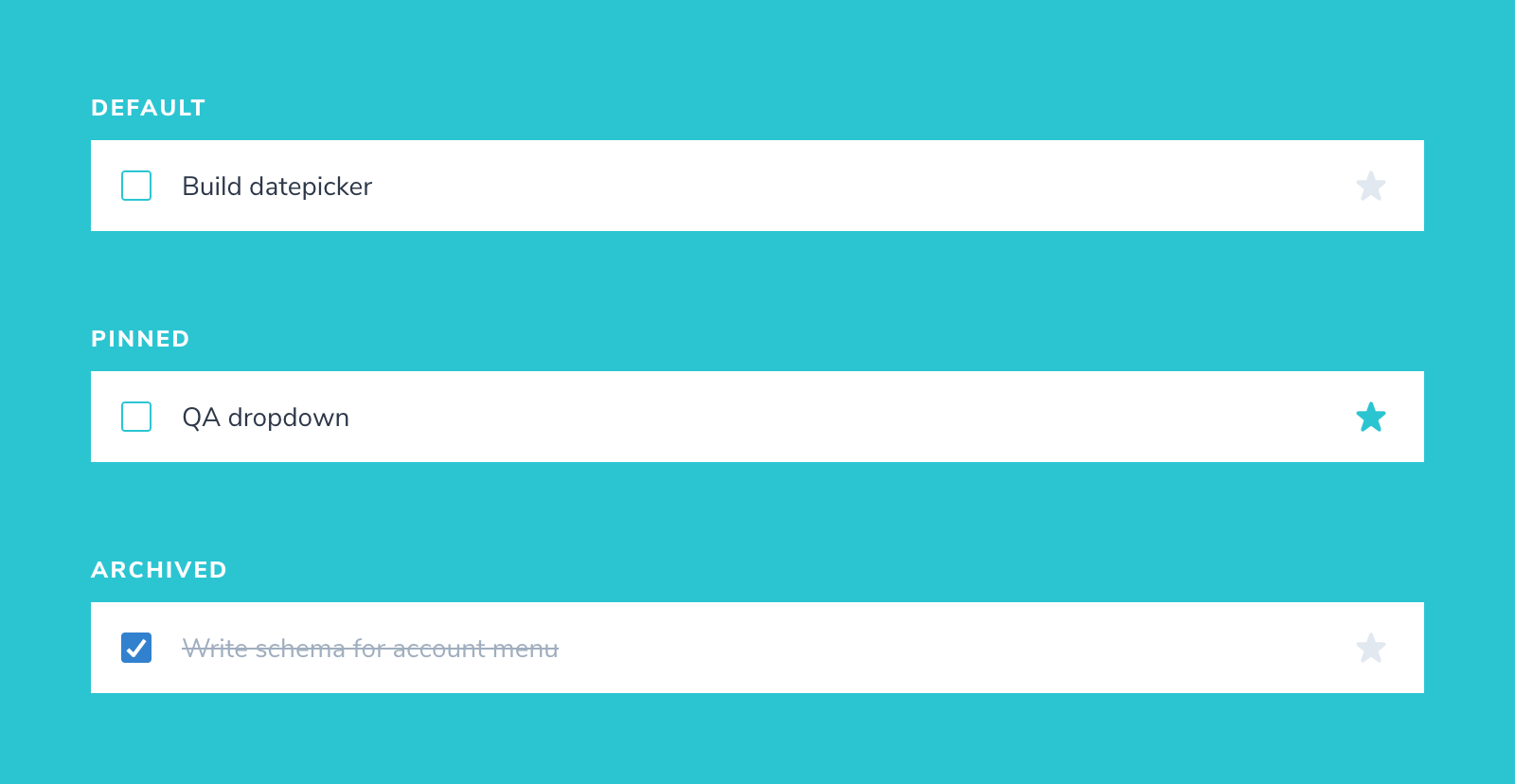 Verification is you evaluating how the component looks in Storybook. That is, does it match the design spec?

The usual development workflow is:

And then repeat the whole cycle until you’ve verified all its states.

By writing a story for each state, you cut out that second step. You can go right from editing code to verifying all test cases. Thus, dramatically speeding up the whole process.

Writing out stories also surfaces scenarios that you wouldn't have considered had you developed it in a more ad-hoc way. For example, what happens if the user enters a really long task? Let's add in that story to find out.

The Task component looks as we expect it to in all its use cases. But, how do we ensure that a stray line of CSS doesn’t break it in the future? It’s unrealistic to manually go through the entire directory of components whenever you make a change.

That’s why developers use a visual regression testing tool to automatically check for regressions. Auth0, Twilio, Adobe and Peloton use Chromatic (built by the Storybook team).

At this point, we know that the component is in a good state. Chromatic will capture an image snapshot of every story—as it appears in the browser. Then any time you make a change, a new snapshot is captured and compared to the previous one. You then review any visual differences found to decide if they are intentional updates or accidental bugs.

Sign in and create a new project and grab your project-token.

Chromatic is built specifically for Storybook and requires no configuration. Running the command below will trigger it to capture a snapshot of each story (using a cloud browser).

The first run will be set as the baseline i.e., the starting point. And each story has its own baseline. 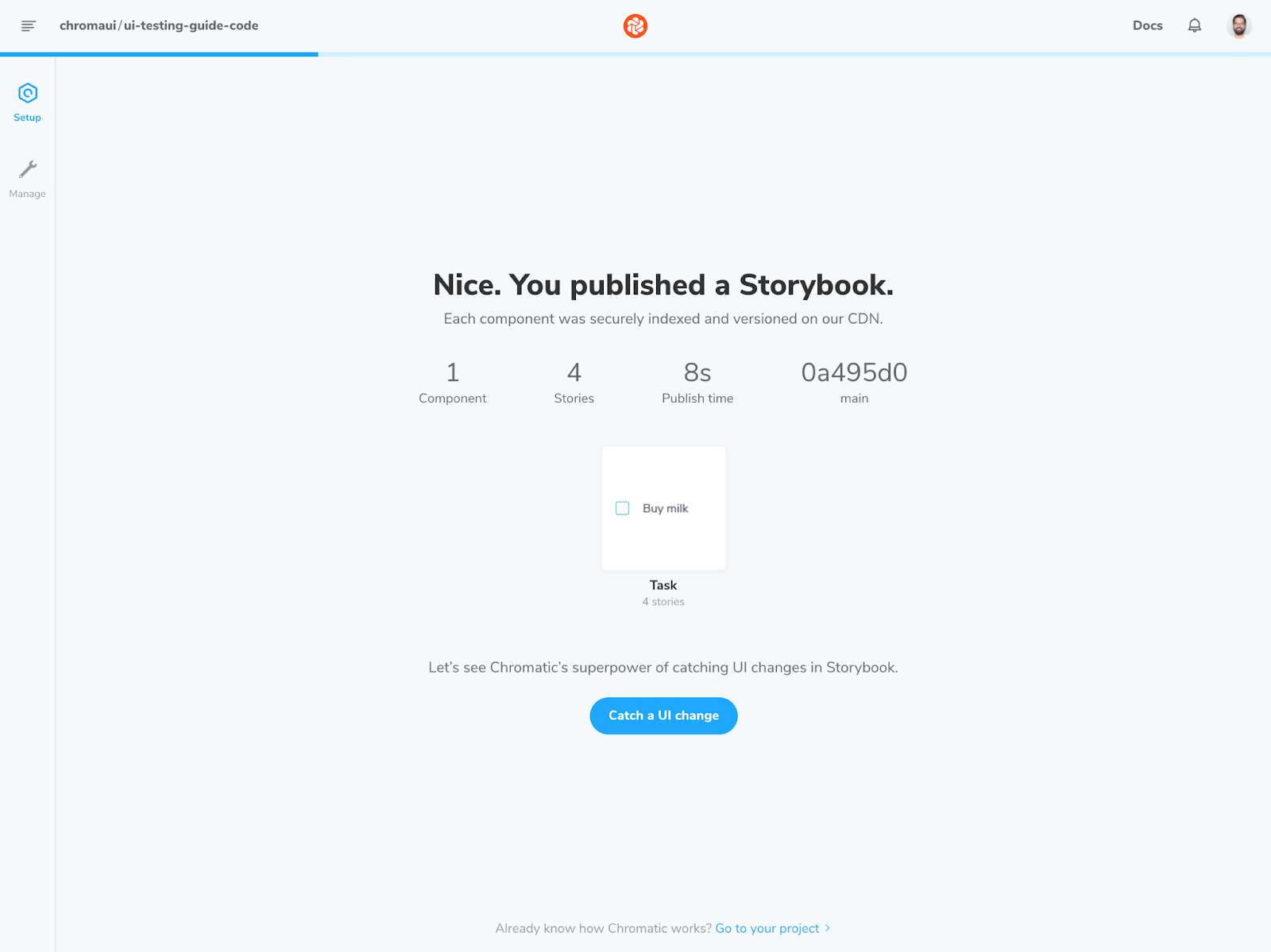 On each commit, new snapshots are captured and compared against existing baselines to detect UI changes. Let’s see that check in action.

First, make a tweak to the UI. We’re going to change the pinned icon and the text styling. Update the Task component, then make a commit and rerun Chromatic.

You’ll now be presented with a diff.

Regression testing ensures that we don’t introduce changes by accident. But it’s still up to you to decide whether changes are intentional or not.

✅ If the changes are intentional, press accept. The new snapshot will now be set as the baseline.

❌ If the changes are unintentional, press deny. The build will fail. Fix the code and run Chromatic again.

In our case, the changes were intentional. Go ahead and click accept for all stories. The whole workflow is illustrated below.

Stopping one bug from turning into many

A bit of leaky CSS or one broken component can snowball into multiple issues. These bugs are particularly frustrating to debug. In the next chapter, we'll build upon these concepts to learn how to catch such cascading problems.

Keep your code in sync with this chapter. View 1576028 on GitHub.
Is this free guide helping you? Tweet to give kudos and help other devs find it.
Next Chapter
Composition
Prevent minor changes from turning into major regressions
✍️ Edit on GitHub – PRs welcome!