A testing workflow that doesn’t slow you down

It's easy to find tools that test different parts of the UI. But knowing how to combine them into a productive workflow is tricky. If you get it wrong, it spirals into a maintenance nightmare.

Our workflow reduces the maintenance burden by reusing stories as test cases. Plus, we can spot bugs faster by testing at the component level.

This chapter demonstrates the entire UI testing workflow by adding in the ability to delete a task.

The Task component already allows users to edit, pin and archive a task. We'll add a delete button and wire that up to the application state to add the delete functionality.

For this demo, let's jump straight to the point where you're ready to test. Download the updated files and place them in the /src directory:

First, we're going to ensure that the updated UI styles match the spec. The Task component now requires the onDeleteTask prop to handle deletions. Let's mock that out as an action in the Task stories.

Instead of booting up the entire application, you can use Storybook to focus on just the Task component. Then cycle through all its stories to manually verify their appearance.

Tweaks to the Task UI can lead to unintended changes in other components where it's used: TaskList and InboxScreen. Running visual tests with Chromatic will catch those. It'll also ensure that everything is still wired up correctly.

Chromatic will be triggered automatically when you create a pull request. On completion, you'll be presented with a diff to review. In this case, the changes are intentional. Press the accept button to update the baselines. 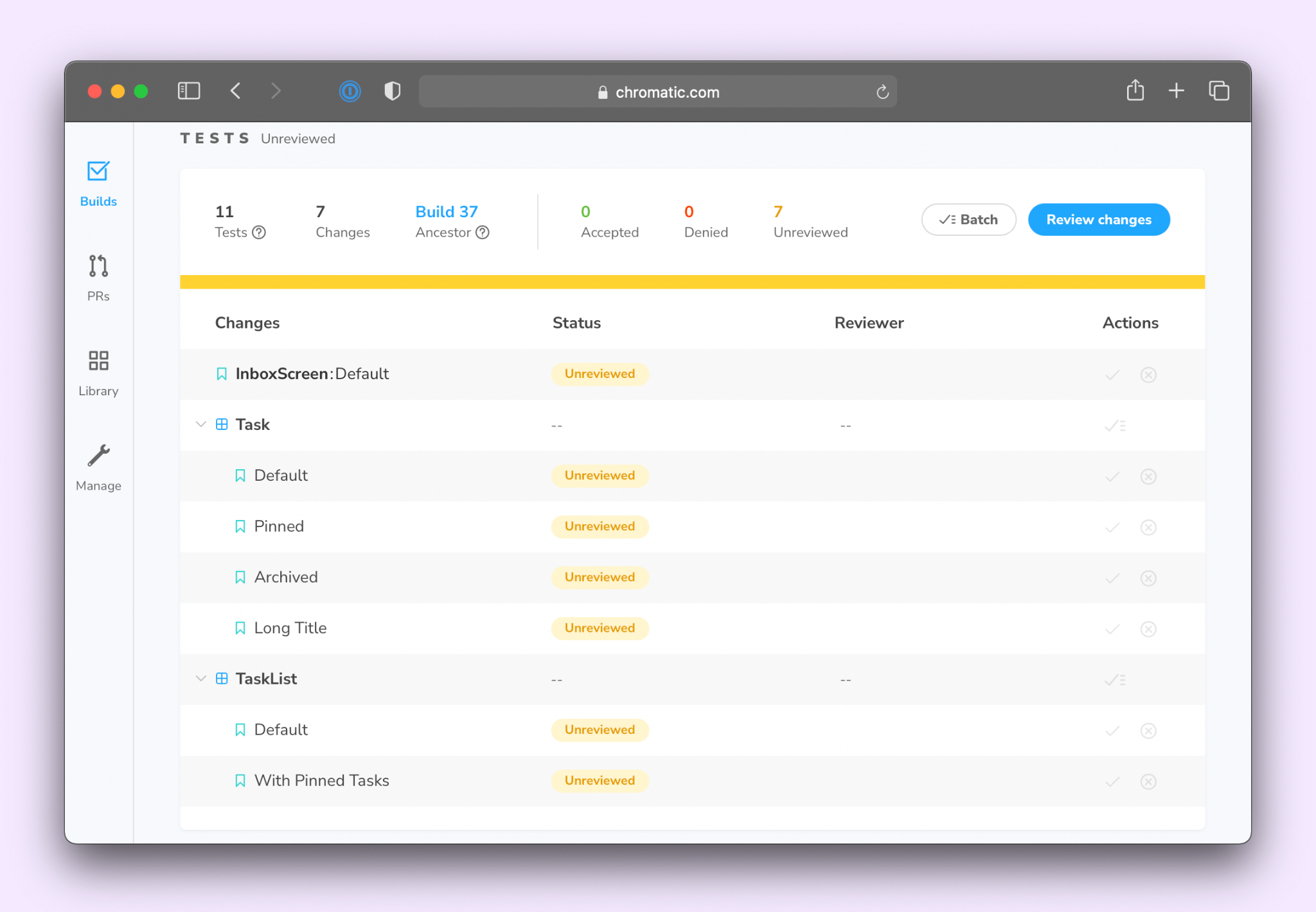 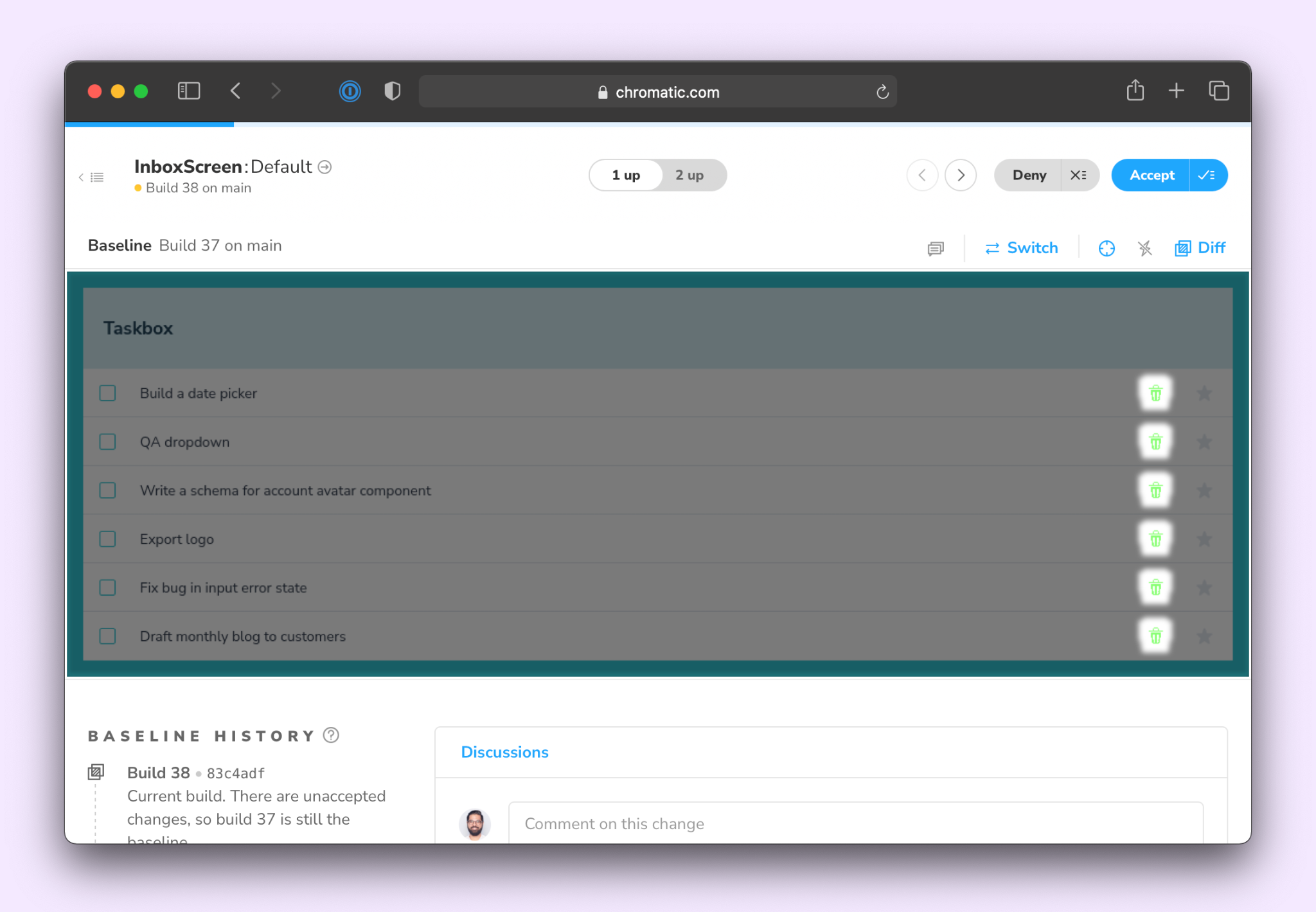 Run accessibility checks inside Storybook during development. The A11y addon uses Axe to audit the active story and displays the report in the addon panel. A quick glance confirms that none of our stories have any violations.

To catch regressions you need to run on all your components. You can do that by importing stories into a test file and then running an accessibility audit using jest-axe. All violations will be reported back to the PR page. 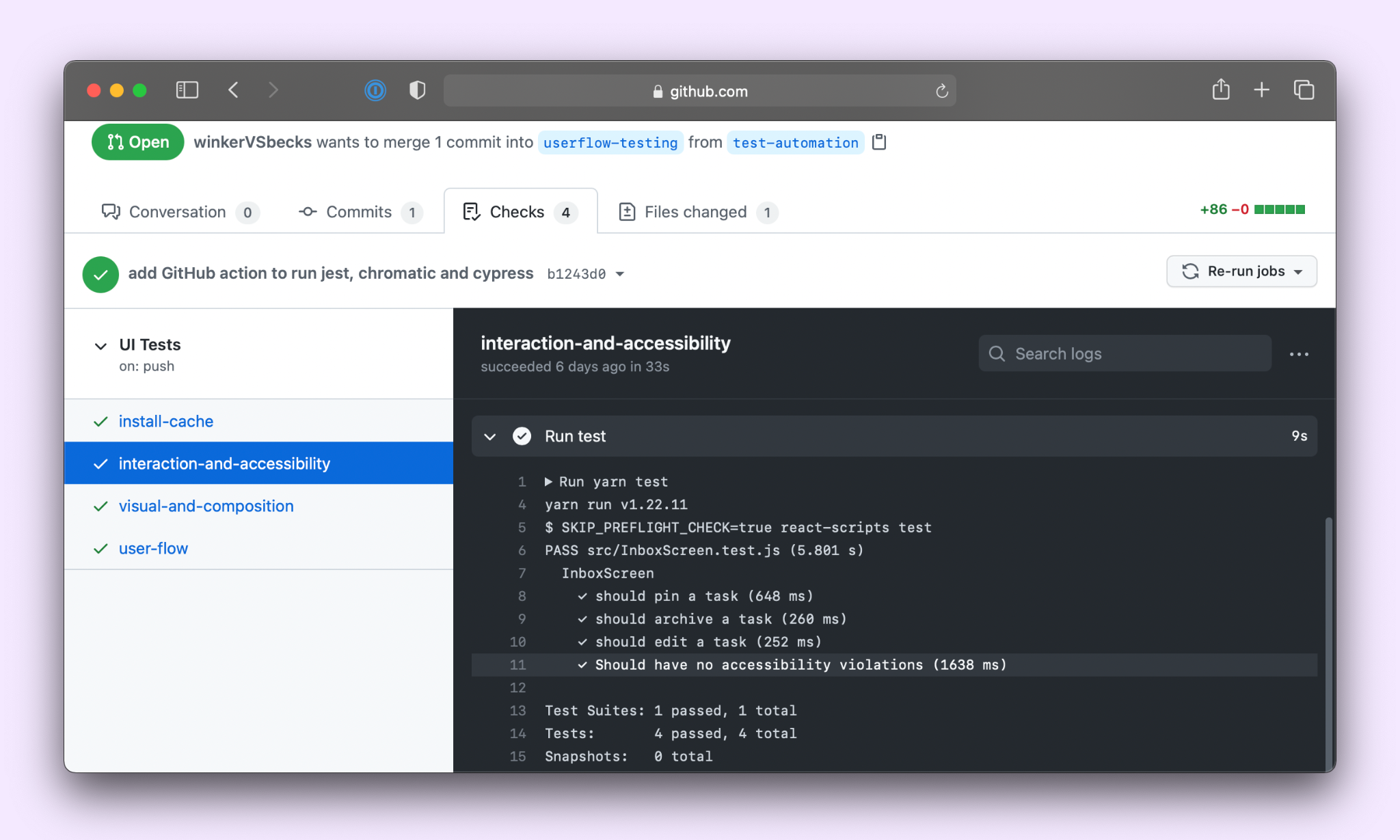 The user can delete a task by clicking on the trash can button, we’ll need to add in a test to verify that behaviour.

During development, manually verify the interaction using the InboxScreen stories. If it’s working as expected, you can move on to adding in an interaction test using Jest and Testing Library.

Run yarn test to confirm that all tests are passing. Notice how Jest runs in watch mode and only executes tests related to files that changed. 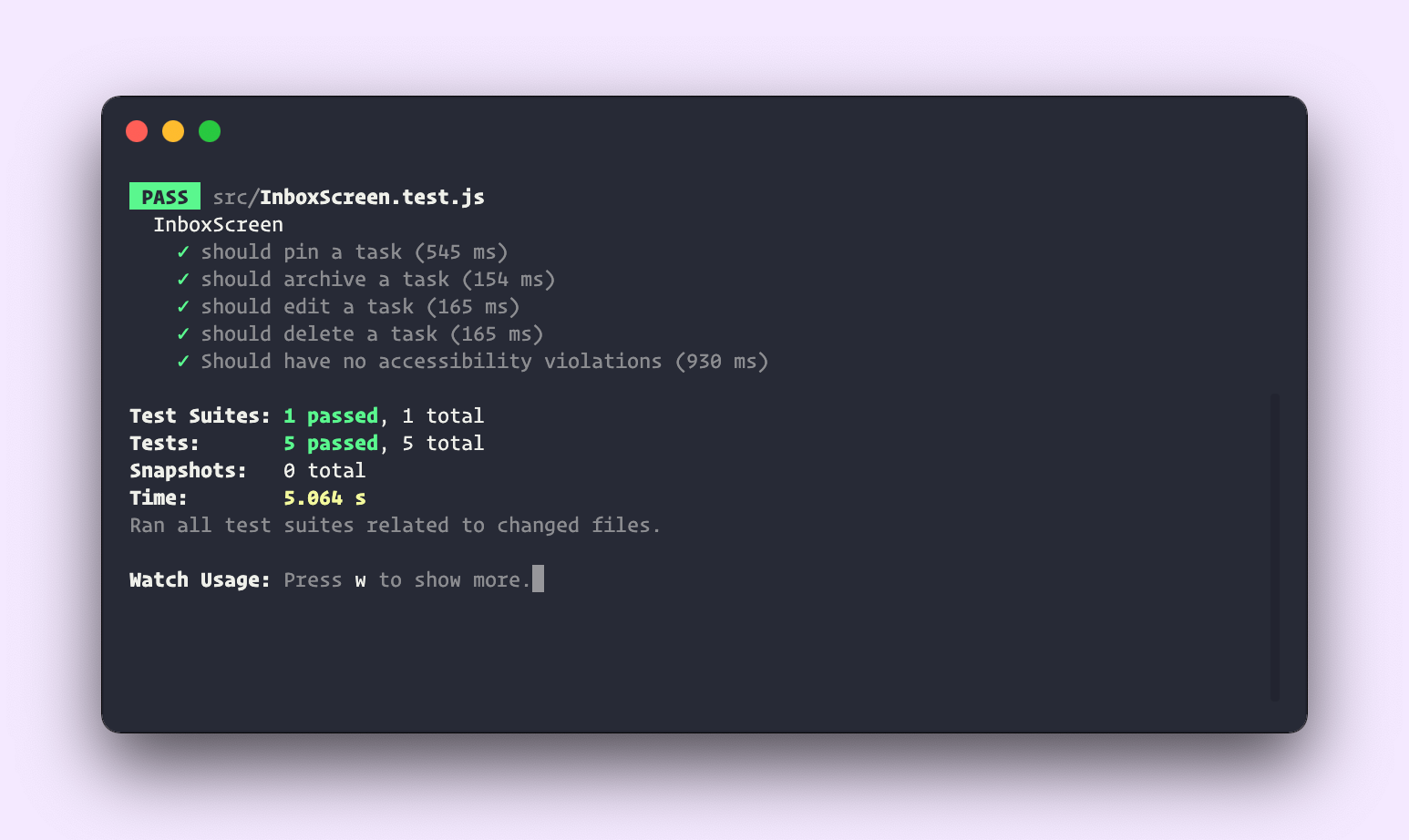 Github Actions will run Jest when the pull request is created and report status via PR checks.

Lastly, you'll need to run E2E tests to ensure that all your critical user flows are working as expected.

This new functionality doesn't impact the auth flow. Therefore, you can wait to run Cypress on the CI server. You only need to run targeted E2E tests during development if you add or update a test. 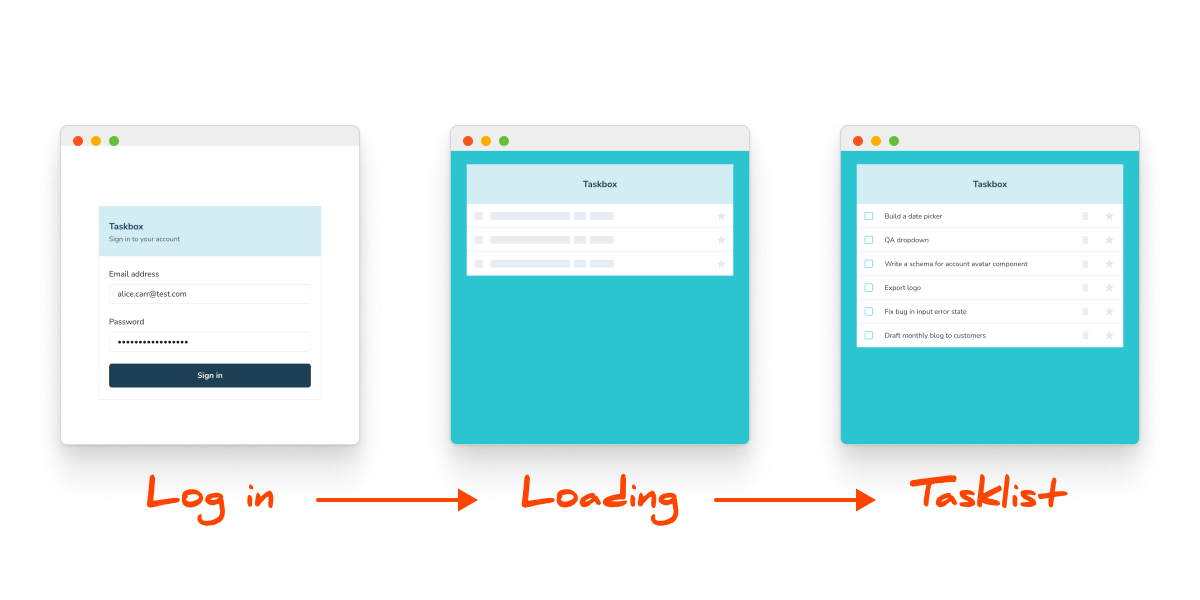 Just like all your other tests, Github actions will also run E2E tests using Cypress. 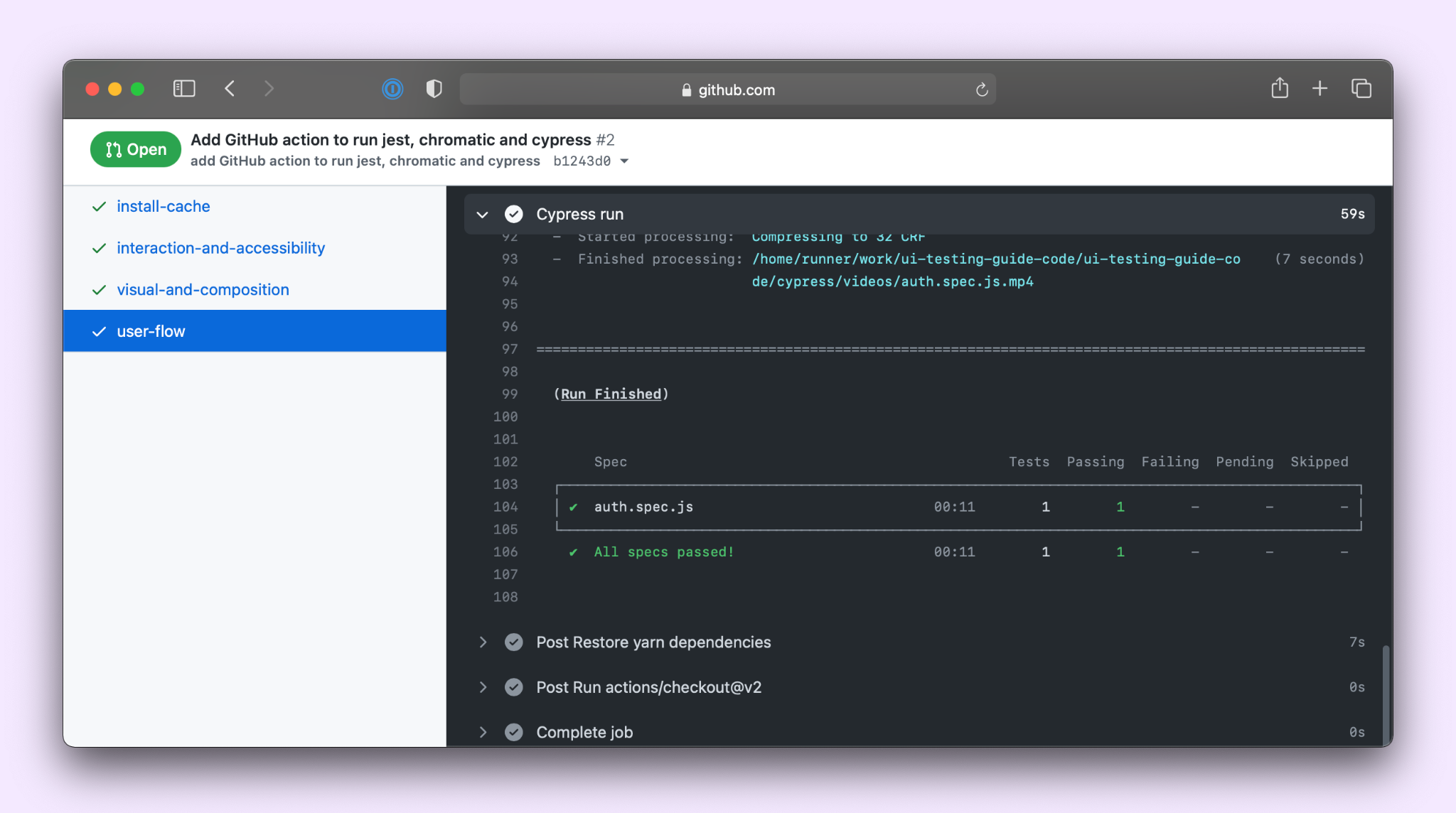 UI Testing handbook highlights testing strategies used by professional front-end teams. These tests act as health checks for your app, verify everything from visual appearance to UI logic, and even detect integration issues. What's more, you can reduce bugs by using continuous integration to test each commit automatically.

Keep your code in sync with this chapter. View 0fde846 on GitHub.
Is this free guide helping you? Tweet to give kudos and help other devs find it.
Next Chapter
Conclusion
Get more done by doing less
✍️ Edit on GitHub – PRs welcome!