As you build more complex UIs like pages, components become responsible for more than just rendering the UI. They fetch data and manage state. Interaction tests allow you to verify these functional aspects of UIs.

In a nutshell, you start by supplying the appropriate props for the initial state of a component. Then simulate user behavior such as clicks and form entries. Finally, check whether the UI and component state update correctly.

In Storybook, this familiar workflow happens in your browser. That makes it easier to debug failures because you're running tests in the same environment as you develop components: the browser.

How does component testing in Storybook work?

You start by writing a story to set up the component's initial state. Then simulate user behavior using the play function. Finally, use the test-runner to confirm that the component renders correctly and that your interaction tests with the play function pass. Additionally, you can automate test execution via the command line or in your CI environment.

Set up the interactions addon

To enable interaction testing with Storybook, you'll need to take additional steps to set it up properly. We recommend you go through the test runner documentation before proceeding with the rest of the required configuration.

Run the following command to install the interactions addon and related dependencies.

Update your Storybook configuration (in .storybook/main.js|ts) to include the interactions addon and enable playback controls for debugging.

The test itself is defined inside a play function connected to a story. Here's an example of how to set up an interaction test with Storybook and the play function:

Once the story loads in the UI, it simulates the user's behavior and verifies the underlying logic.

Below is an abridged API for user-event. For more, check out the official user-event docs.

If you check your interactions panel, you'll see the step-by-step flow. It also offers a handy set of UI controls to pause, resume, rewind, and step through each interaction.

The play function is executed after the story is rendered. If there’s an error, it’ll be shown in the interaction addon panel to help with debugging.

Since Storybook is a webapp, anyone with the URL can reproduce the error with the same detailed information without any additional environment configuration or tooling required.

Execute tests with the test-runner

Storybook only runs the interaction test when you're viewing a story. Therefore, you'd have to go through each story to run all your checks. As your Storybook grows, it becomes unrealistic to review each change manually. Storybook test-runner automates the process by running all tests for you. To execute the test-runner, open a new terminal window and run the following command: 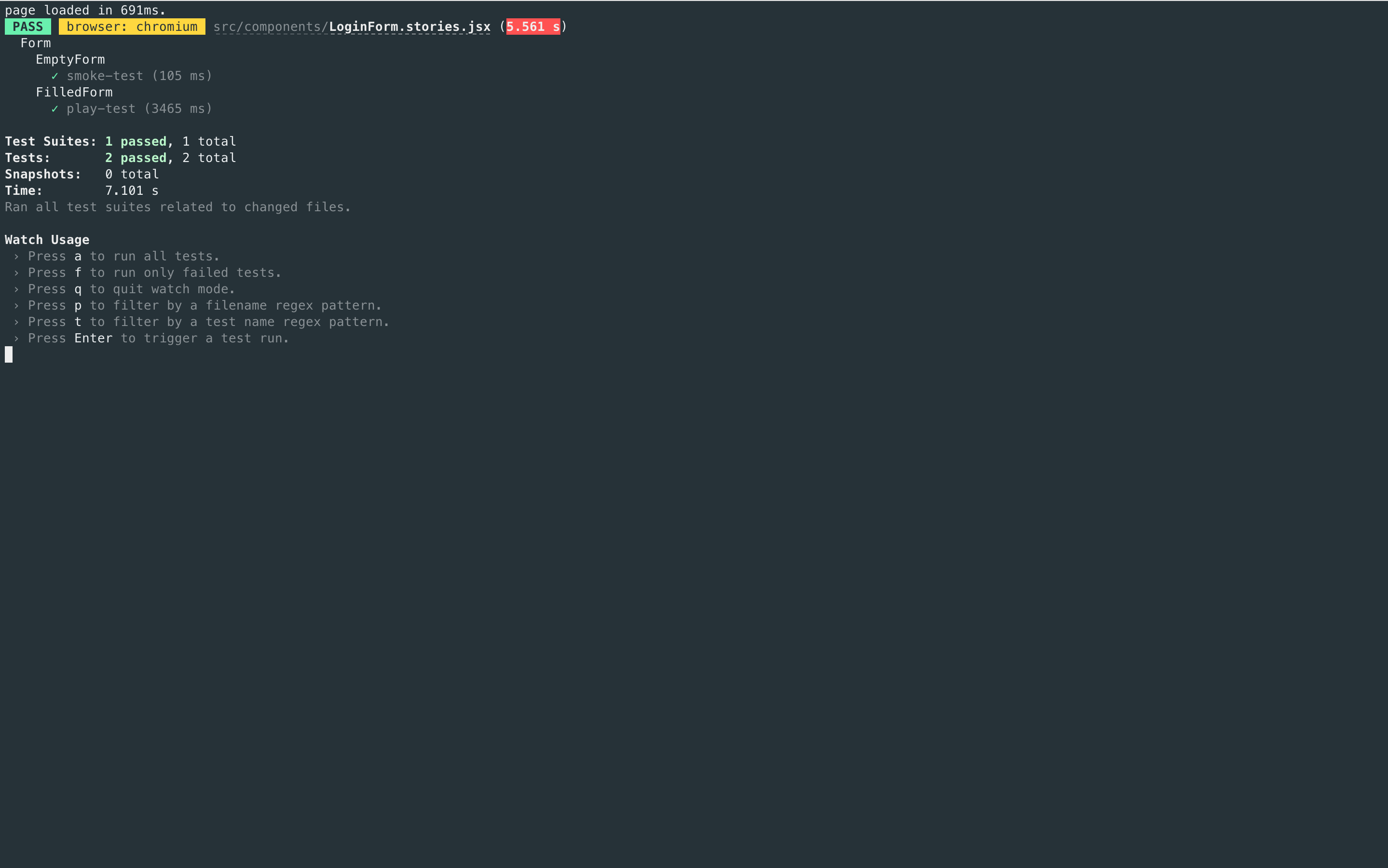 💡 If you need, you can provide additional flags to the test-runner. Read the documentation to learn more.

Once you're ready to push your code into a pull request, you'll want to automatically run all your checks using a Continuous Integration (CI) service before merging it. Read our documentation for a detailed guide on setting up a CI environment to run tests.

What’s the difference between interaction tests and visual tests?

Interaction tests can be expensive to maintain when applied wholesale to every component. We recommend combining them with other methods like visual testing for comprehensive coverage with less maintenance work.

Interaction tests integrate Jest and Testing Library into Storybook. The biggest benefit is the ability to view the component you're testing in a real browser. That helps you debug visually, instead of getting a dump of the (fake) DOM in the command line or hitting the limitations of how JSDOM mocks browser functionality. It's also more convenient to keep stories and tests together in one file than having them spread across files.