Contribute a new feature or bug fix to Storybook's monorepo. This page outlines how to get your environment set up to contribute code.

Start by forking the Storybook monorepo and cloning it locally.

Navigate to the storybook directory and install the required dependencies with the following commands:

Once you've completed the initial setup, you should have a fully functional version of Storybook built on your local machine. Before making any code changes, it's helpful to verify that everything is working as it should. More specifically, the test suite and examples.

Run the following command to execute the tests:

Once the tests finish, check if the examples are working with the following commands:

💡 The Storybook monorepo contains various example projects, each corresponding to a different framework and environment, and they are commonly used as additional tooling to test new features.

If everything is working as it should, you should see the example/cra-ts-essentials Storybook running.

Now that you've verified your setup, it's time to jump into code. The simplest way to do this is to run one of the examples in one terminal window and the interactive build process in a separate terminal.

Assuming you're still running the examples/cra-ts-essentials from the previous step, open a new terminal and navigate to the root of the Storybook monorepo. Then, create a new branch with the following command:

Run the build process with:

💡 Build's watch mode is great for interactive development. However, for performance reasons it only transpiles your code and doesn't execute the TypeScript compiler. If something isn't working as expected, try running build WITHOUT watch mode: it will re-generate TypeScript types and also perform type checking for you. 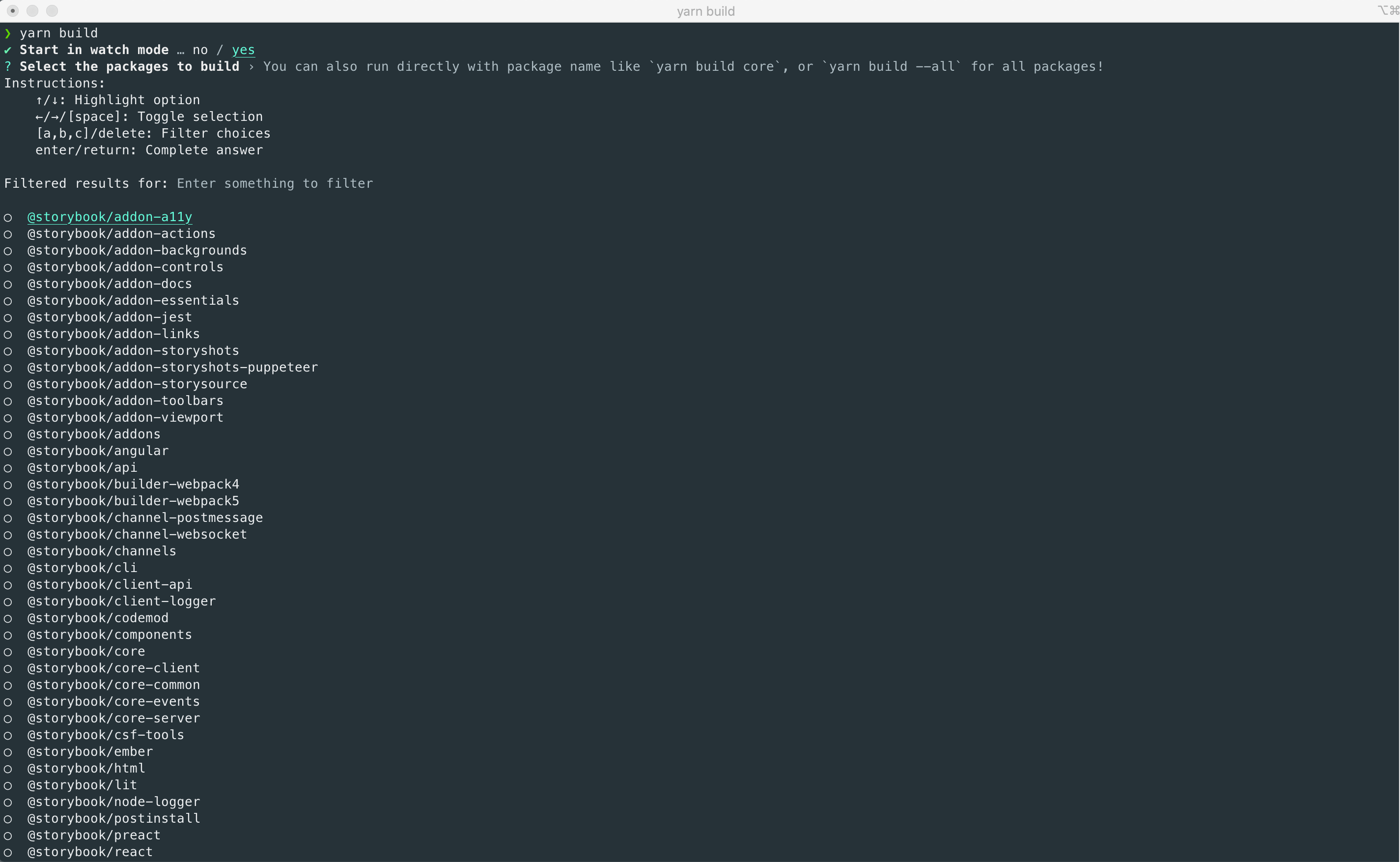 If the work you'll be doing affects the Preview (the innermost Storybook iframe, where the stories are displayed), it will automatically refresh one to two seconds after you save.

Otherwise, if it affects the Manager (the outermost Storybook iframe where the addons are displayed), you'll need to refresh manually after saving.

When you're done coding, add documentation and tests as appropriate. That simplifies the PR review process, which means your code will get merged faster.

Adding a story or set of stories to our suite of example apps helps you test your work.

If you're modifying part of Storybook's core, or one of the essential addons, there's probably an existing set of stories in the official-storybook that documents how the feature is supposed to work. Add your stories there.

If you're modifying something related to a specific framework, the framework will have its own examples in the monorepo. For instance, examples/vue-kitchen-sink is a natural place to add stories for @storybook/vue while examples/angular-cli is the place for @storybook/angular.

Unit tests ensure that Storybook doesn't break accidentally. If your code can regress in non-obvious ways, include unit tests with your PR. Use the following naming convention:

Storybook's monorepo is set up to rely on end-to-end testing with Cypress during CI. To help with testing, we encourage running this test suite before submitting your contribution. Detailed below are some steps you can take:

Before submitting your contribution, run the test suite one last time with:

💡 Storybook uses jest as part of the testing suite, if you notice that the snapshot tests fail you can re-run and update them with yarn test -u.

Doing this prevents last-minute bugs and is also a great way to get your contribution merged faster once you submit your pull request. Failing to do so will lead to one of the maintainers mark the pull request with the Work in Progress label until all tests pass.

Once the test suite finishes, it's time to commit, push and open a pull request against Storybook's next (default) branch. This branch is where all active development happens and is associated with the latest prerelease version (e.g., 6.3.0-alpha.25).

If your contribution focuses on a bugfix and you want it featured in the next stable release, mention it in the pull request description. We'll try to patch it in if it appears to be non-disruptive and fixes a critical bug.

Useful resources when working with forks

How to work with reproductions

To do so, run the following command in the root of the monorepo:

This command creates a project ../storybook-repros/your-project, and automatically links it to your local Storybook code. After connecting it, you should be able to run Storybook and develop as mentioned above.

If you already have a reproduction on your local machine, you can similarly link it to your monorepo dev setup with the --local flag:

💡 The storybook link command relies on yarn 2 linking under the hood. It requires that the local repro is using yarn 2, which will be the case if you're using the [storybook repro command](./how-to-reproduce) per our contributing guidelines. If you are trying to link to a non-yarn 2 project, linking will fail.